Who is Umut Kiran? 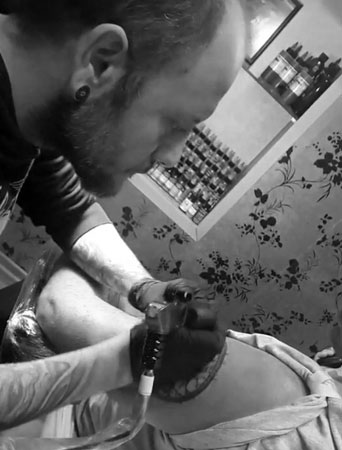 Umut Kiran was born on 22nd of July, 1977 in Trabzon, and moved to İstanbul with his family when he was 7 years old. After he graduated from Pendik High school, he attended Faculty of Fine Arts in Eskisehir  Anadolu University. In 2002, he finished his undergraduate education as an “Artist”.

Kiran, started his career while he was pursuing his university education. In 2000 he established his own studio and between 2000 and 2002, he worked as a body artist. Following two years until 2004, he continued his career as Portrait Artist in Antalya.  In 2005, he joined armed forces to finishes his military service. After he finished his service as an artist, he moved to Istanbul and started to work in Kadikoy Pyramid Tattoo& Piercing Studio. In 2007, he transferred to Dreamcatcher Tattoo & Piercing Studio and he opened his own studio in 2018.

You can check Umut Kiran’s Tattoo work on Tattoo Gallery page of this Site.

Please click on the picture of the Magazine in the left, if you want to read the interview of Umut Kiran, published in the first and the only tattoo magazine in Turkey, Dovme Sanatı.

Tattoo is a body decoration art, that is done by perpetrating ink, which is not unhealthy for the humans, under the skin. Tattoo is seen on a lot of people’s bodies for a long time and its popularity is still on the rise day by day. In old times, people used to have tattoos to express themselves, but in our times, especially young people choose to have tattoos for the sake of being different, having attention or for following the trends. Hygiene is very important for the wellbeing of the tattoo and the person who is getting it done. The equipment used in the process should either be disposable or should be sterilized after each tattoo in the professional sterilization machines. Gloves which are used during the process also should be used for one and only time. The real tattoo inks are tasted and approved by the World Health Organization (WHO), for which there are compatible with human body skin and do not harm.